An English language commentary on the German Civil Code (BGB): "Why has nobody tried until now?" 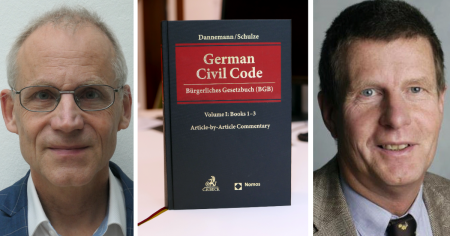 Is it not somewhat surprising that BGB was first translated into English seven years after it entered into force in 1900, but an English commentary has taken 120 years?

Schulze: Definitely – and that is precisely why this commentary was so urgently needed! There is a shocking difference between the work on civil law – i.e. legislation, judicial decisions, doctrine – undertaken in Germany and what is received abroad. A trivial remark by a judge from the American Mid-West may well be cited much more often than a ground-breaking decision from the BGH (German Federal Court of Justice). Beyond the German-speaking world, it is difficult to see what German lawyers have achieved. We hope that our commentary will make a small contribution to solving this major problem.

Dannemann: This commentary really was long overdue. After C.H.BECK approached me with the idea I was not only straight away taken by the project but also asked myself “why has nobody tried until now?” There is of course great interest in German law, especially the BGB.

Schulze: I have also seen just how great the interest is during my guest lectures in Italy, Spain or China, but at the same time I have seen just how limited the access to German law is. Those lawyers who are interested often do not possess the necessary German language skills. Something therefore had to be done. But there is presumably another reason why an English language commentary took so long.

Schulze: Section-by-section commentaries are well established in Germany and we are all aware of their advantages. They are not equally widespread abroad. By serving as a bridge between legislation, judicial decisions and doctrine to impart legal knowledge, such German-style commentaries deserve to be used more commonly abroad. This could also bolster the interest in German law from the perspective of the methodology.

What do you hope for most of all?

Is Dannemann/Schulze – German Civil Code something like an English Palandt?

Dannemann: No, not in the slightest. We are writing on the basis that our audience does not know how German law functions. That is something new. I do not know of any other such commentary. We assume no more from our readers than a basic knowledge of legal topics, issues and methods. By the way, German lawyers also benefit from the commentary: let us consider for instance lawyers who represent English-speaking clients and for whom they draft contracts in English.

Schulze: Precisely. We want to develop a pool of English legal terminology for German law for when German lawyers have to express German law in English.

The post on the publication of the commentary was by far our most successful LinkedIn-post in 2020. Did you expect such a wave of enthusiasm?

Schulze: I not only hoped for such a positive response, I also expected it – from legal scholars abroad and from legal practitioners here and abroad who encounter German law in cross-border transactions. It makes me even happier that the response has been so much greater.

What were the greatest difficulties you experienced during the project?

Dannemann: It took time until we were able to complete our large and fantastic team of authors. Even someone who speaks English very well may not necessarily be able to explain a German legal issue in English. It was therefore a priority to seek experienced comparative lawyers.

Schulze: Indeed. Everything was and is only possible through incredible teamwork. Dr. Jonathon Watson examined all contributions as "assistant editor". He is an English lawyer living in Germany. We certainly would not have been able to complete the commentary without him.

You also had problems with the translation of the BGB. How so?

Dannemann: You can never deviate! Sure, you can sometimes rephrase a noun with a verb, but you must always be very literal and, above all, consistent with the translation. For instance, in sales law you cannot translate Sachen (things) as “goods” because otherwise you would lose the implied reference to all the BGB’s provisions on things, including their definition in § 90. The result of a terminologically consistent translation is inevitably hard and unusual for English ears. Or take “false friends”. I cannot simply translate the word Gegenleistung as “consideration” because the term means something completely different in English. Luckily, with a commentary it is possible to absorb the rigidity of the translation by explaining such references and meanings.

Which translation did you actually work with?

Dannemann: We worked with the translation from the Federal Ministry of Justice, which is available under gesetze-im-internet.de. As is to be expected, the translation has a number of flaws, but there were various reasons why our efforts to motivate the Ministry to allow us to make changes – which would have had copyright implications – were unfortunately not successful. We had to work with the translation as it stands, warts and all. We did suggest to the authors that they draw the reader’s attention to shortcomings in the translation.

Where does it go from here?

Dannemann: We are working on Volume II, as family law and succession law are still missing. The second volume is due to be published at the end of 2021.

Schulze: Once the entire book is finished, we hope that in a second edition we will be able to polish the translation and to include comments, which we hope to receive from the readers, as well as suggestions from a practitioner’s perspective.